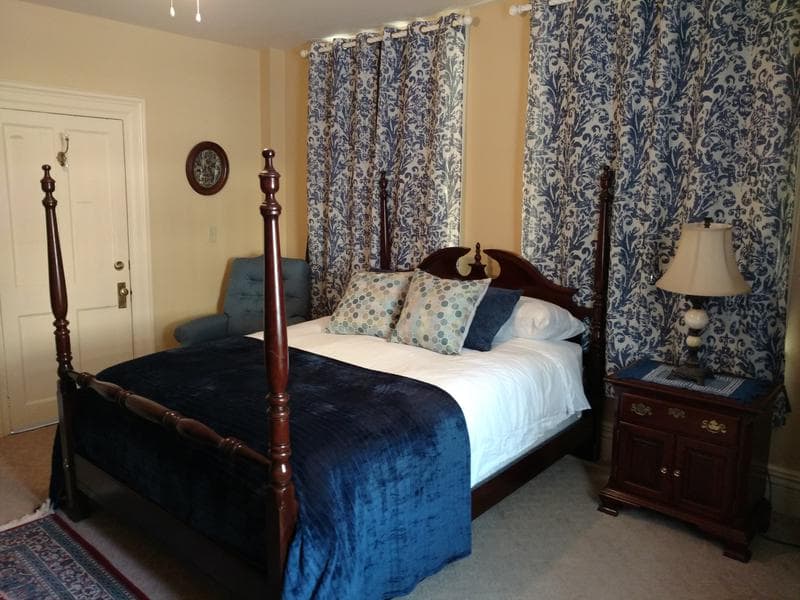 Our first floor room, (the royal room), is named after Frances Perkins, Franklin Delano Roosevelt’s Secretary of Labor, 1933-1945 and the first woman to serve as a cabinet secretary. She was the principal architect of the New Deal, credited with formulating policies to shore up the national economy following the nation’s most serious economic crisis and helping to create the modern middle class. She was in every respect a self-made woman who rose from humble New England origins to become America’s leading advocate for industrial safety and workers’ rights. She graduated from Mt. Holyoke College in 1902.

This room features a four poster mahogany bed with a wonderfully comfortable queen sized mattress, dresser and armoire, a comfortable wing backed chair, electric fireplace, mosaic tiled hearth and fireplace surround. The private bathroom features plush towels, and bath tub with shower. For guests who may have difficulty with stairs we offer breakfast service in this room. 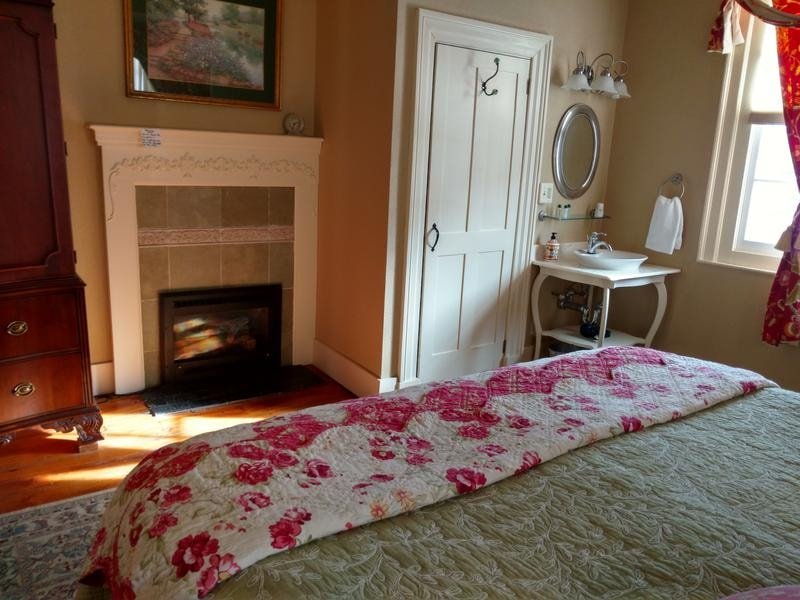 Room #4, (the green room) is named for Joseph Allen Skinner, The thirteenth owner of record of the Daniel Stebbins House. Skinner was born May 23, 1862. He earned a Bachelors of Philosophy of Science from Yale Scientific School in 1883. Returning to Holyoke, he joined his brother William in the silk factory, known as William Skinner & Sons or the Skinner Manufacturing Co. He eventually served as vice president and treasurer of Skinner Mills, as well as service on the boards of the Hadley Falls Trust Company of Holyoke, and the New England Telephone and Telegraph Company.

This lovely room features a king-sized bed with a wonderfully comfortable mattress that can be converted to two twin-sized beds, luxury linens, comfortable wing backed chair, armoire and dresser. The gas fireplace adds to the comfort and ambiance of this lovely room which features green tile-work around the fireplace. 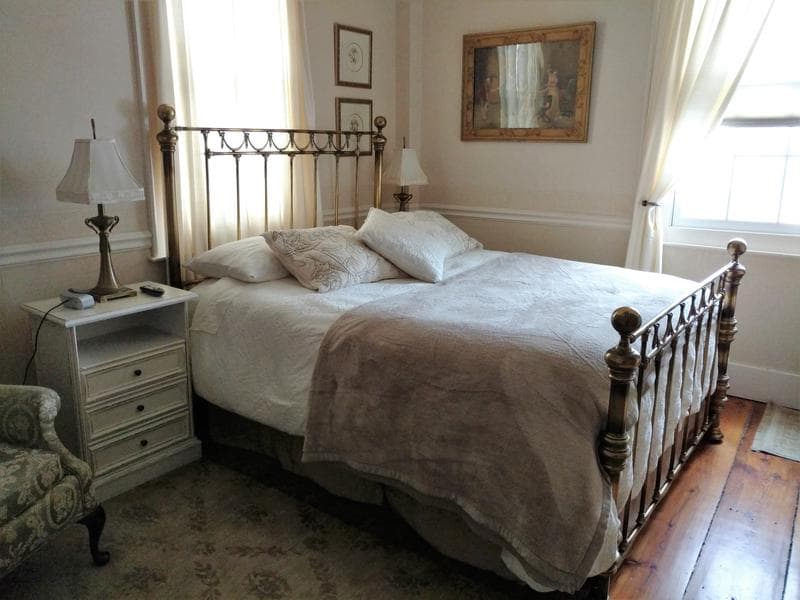 Room #3, (the cream room) is named after Abby Wright. Abby Wright was born in Wethersfield, Connecticut in 1774. She attended Westfield Academy in 1800-1801, and boarded with the Stebbins family from 1803-06 while she opened and operated her own school for the education of young girls in South Hadley. She taught reading, writing, and arithmetic, and also skill with needle and thread. The key characteristics of Abby Wright’s technique includes a combination of painting on silk, stitchery on silk and coiled silver thread. By the early 19th century, pictorial needlework constituted a major product for New England schools teaching needlework.

This lovely room features a brass bed with a wonderfully comfortable queen size mattress, luxury linens, comfortable wing backed chair, armoire and desk. The gas fireplace adds to the comfort and ambiance of this lovely room which features gold tile-work around the fireplace. 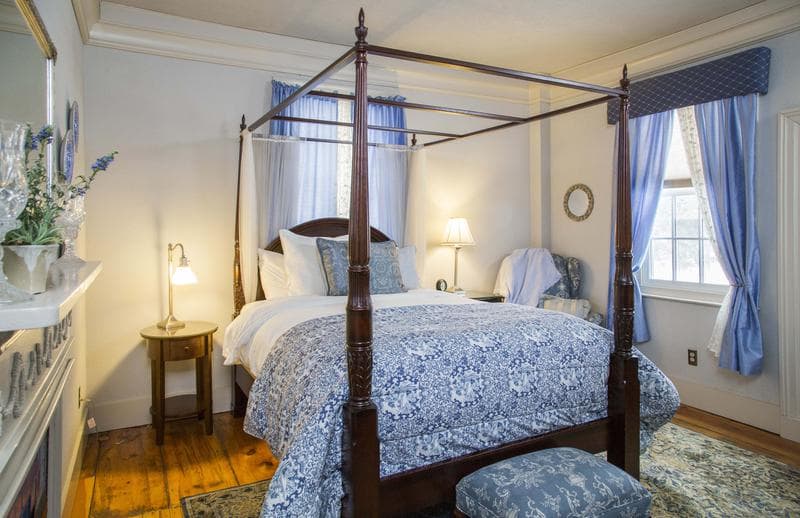 Room #2, (the blue room) is the Dr. Daniel Stebbins Room named after the physician who designed and built this house in 1795. Dr. Daniel Stebbins was born on April 2, 1766 in Springfield, MA. He was educated at Yale and practiced medicine in Longmeadow for several years before moving to South Hadley where he also engaged in merchandising and other pursuits by which he accumulated a handsome estate. He built this house in 1795 and lived here until 1806 when he and his family moved to Northampton. He was a man of ambition and compassion, integrity and piety. He was deeply interested in all objects conducive to public welfare and served as the Hampshire County Treasurer for 35 years. He was benevolent, charitable and devoted to the public good. Dr Stebbins owned this house until 1812 when he sold it to Evan Johns, Clerk. He died in Oct 7, 1856. 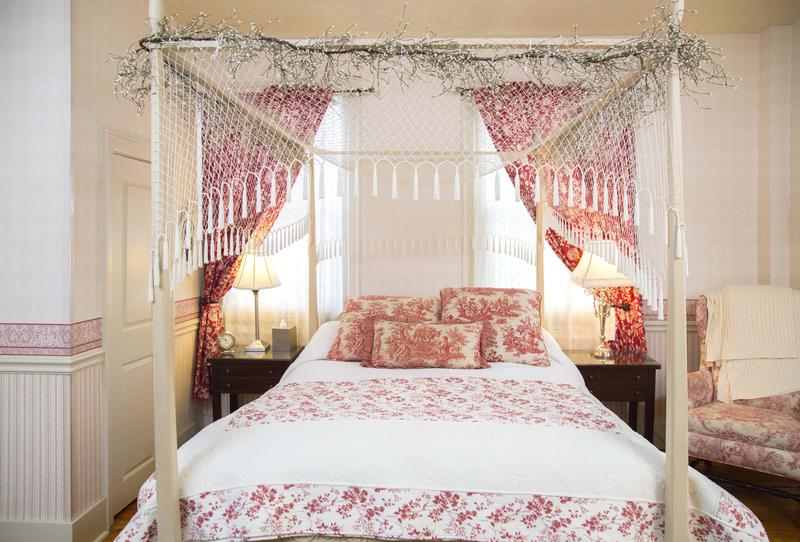 Room #1, (the red room), is the Mary Lyon Room, named after the founder of Mt Holyoke College in 1835, the first all women’s institute of higher education offering the same curriculum as its male counterparts. Mary Lyon, born in 1797 in the small rural township of Buckland, Massachusetts became a school teacher at the age of 17. Inspired by her own struggles to obtain an education, she worked hard to expand academic opportunities for young women. An American pioneer, she was a remarkable woman who founded the worldwide model of higher education for women–Mount Holyoke College. Mary Lyon proved that women were as intellectually capable as men, and that an institution for women offering a college curriculum could survive financially.